Temperature inversions: Something to consider before spraying

Temperature inversions: Something to consider before spraying

By Ryan Miller and David Nicolai 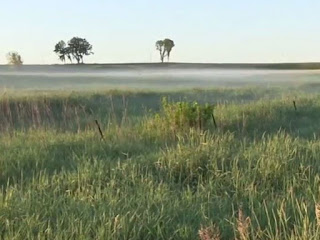 We have produced a video, Temperature inversions: Something to consider before spraying (https://youtu.be/jG10vCT1POg), that discusses the development of temperature inversions, which can affect the drift, or off target movement of pesticides during post emergence applications. Issues relating to temperature inversions and how they develop is summarized below. This content comes to us from neighboring land-grant universities (see references for detailed source information).

Applying pesticides during a temperature inversion can result in damaging, long distance drift. Inversions occur when warm air, which is light, rises upward into the atmosphere and cool air, which is heavy, settles near the ground. With these conditions of warm air above cool air, there is no mixing of air. Spray droplets are not dispersed, but stay in a concentrated mass and move with any subtle airflow that may land off-target. Typically, temperature inversions start at dusk and break up with the sunrise because of vertical air mixing.

Spraying during an inversion never is recommended, even with drift-reducing nozzles or drift retardants. Drift-reducing nozzles or drift retardants still produce some fine drops less than 200 microns in diameter that are likely to drift. During an inversion, the air temperature increases with increasing height above the soil surface. As a result, the coldest, densest air is at the surface and its density steadily decreases with increasing height. The result is a very stable stratification of air that prevents vertical air motion.

Evening is very different from mornings for inversion formation. During a clear morning, an inversion that formed the previous evening or night is dissipating. However, on a clear evening with low wind speeds, the applicator must be extremely observant because an inversion already may be forming and is intensifying steadily and growing in height.

Conditions that favor the development of an inversion: