Wet spring weather and nitrogen loss: what has happened to my pre-plant nitrogen?

Wet spring weather and nitrogen loss: what has happened to my pre-plant nitrogen? Much of the state has seen periods of very wet weather this spring, especially in southeastern and central Minnesota. Given the heavy precipitation, what – if anything – has happened to spring pre-plant nitrogen? How much N is still available to the plant? Here are the top six things to consider when assessing pre-plant nitrogen loss:

The first thing to keep in mind is that, when we talk about loss of nitrogen fertilizer with wet weather, we’re really talking about the loss of the nitrate form of nitrogen. Nitrate is the form of nitrogen that most easily moves with water below the root zone. It can also be denitrified and lost to the air when soils are flooded. 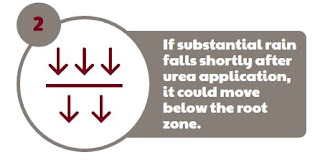 The exception to number one happens when heavy rain occurs within 24 hours or so after urea application. Urea transforms quickly to ammonium in the soil (which is not easily leached), but while it is in the urea form, the fertilizer is very soluble and will leach with water moving down the soil profile. So if substantial precipitation occurs shortly after the application, some of that urea could move below the root zone. 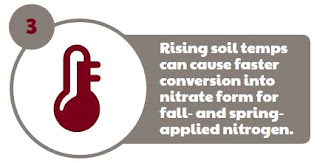 The amount of nitrogen fertilizer in the nitrate form depends on which type of fertilizer you apply and what soil conditions have been like since that application. Microorganisms in the soil are responsible for converting other forms of nitrogen into nitrate. Like the microorganisms that spoil the food we eat, the conversion of fertilizer nitrogen into nitrate by microorganisms happens faster at higher temperatures. Typically, this conversion happens twice as fast with each 10°F rise in temperature. For example, urea that takes 24 days to fully convert to nitrate at 50°F will fully convert to nitrate in six days at 70°F.

With this in mind, recent weather has been challenging. Soils have been substantially warmer than normal for most of fall 2016 through now (June 2017), which means fertilizer can convert to nitrate forms more rapidly with both fall-applied and early spring-applied nitrogen. At the same time, wet conditions in April delayed planting compared to recent warm years, creating the potential for a situation with a lot of nitrate buildup in the soil and a corn crop that’s not taking much of that nitrate up yet.

In fine-textured soils that have little or no artificial drainage or in low areas of the field where water tends to pond, denitrification is the main loss mechanism. Denitrification typically happens 24 to 48 hours after saturation conditions. This is because the microorganisms that transform nitrate to gaseous forms that get lost to the atmosphere function in soils depleted of oxygen. In general when soil temperatures are warm (above 65°F), an estimated four to five percent of the nitrogen in the nitrate form – remember the ammonium form is not a problem –  can be lost for each day that soils are saturated. For example: if 50 percent of a 120 lb N application is in the nitrate form, and soils are then saturated for four days, the N loss estimate would be (120 lb N per acre x 50% nitrate/100) x (5% per day/100) x (4 days) = 12 lb N per acre.

5. Water movement through the soil

Not all nitrogen from the applied fertilizer will be completely lost, even in situations in which extremely wet conditions have kept soils saturated for long periods of time. This is because, while nitrate moves with water, only some of the water infiltrating the soil will move down through the soil below the rooting zone. Much of the water stays put in the smaller pores in the soil.

Soil texture plays a role in how fast water moves down through the soil. As a rule of thumb, with each inch of water moving down through the soil, nitrates will move down with that water five to six inches in silt loam and clayey soils, and up to 12 inches in sandy soils. It’s worth noting that the nitrate that moves below the rooting zone can still be available to corn later in the growing season, as long as it hasn’t left through a tile drain. As surface soils dry out, water from below the rooting zone often starts moving up through the soil, taking nitrate with it to plant roots.

Another thing to consider is how much of the rainfall that fell actually entered the soil. Very intense rainfall, especially on long or steep slopes, more likely to result in runoff than infiltration of the soil. Most infiltration is likely to happen with rainfalls sustained over multiple days rather than in quick, violent bursts. Generally, the greater the amount of precipitation, the greater proportion of that precipitation that runs off. For example, in southeastern Minnesota, the Root River Field-to-Stream Partnership found that an average of seven percent of precipitation falling on farm fields over the last seven years runs off the land, the majority of this runoff coming during April, May, and June. However, on a year-to-year basis, this number varies dramatically- from less than one percent (very dry year) to over 24 percent (very wet year) of precipitation leaving the land as runoff. Much more nitrogen is lost with water that infiltrates the soil than with water that runs off the soil surface, but if a big runoff event catches you at the wrong time, it can take significant amounts of nitrogen with it as well. Data from Discovery Farms Minnesota found the loss of nitrogen fertilizer surface-applied shortly before a runoff event can be up to six pounds/acre.

While some nitrogen loss likely occurred in wet fields, most of the corn planted across the state is still at the V3 growth stage or earlier, which means it is still too early to make a decision about how much supplemental nitrogen to apply. The cool, wet weather has stressed the corn crop, particularly in early-planted corn, limiting water and nutrient uptake. As a result, a lot of corn looks nitrogen deficient at the moment. This does not necessarily mean the soil doesn’t have enough nitrogen. With a good stretch of warmer and sunnier weather coming our way, crop growth will resume, and the deficiency symptoms related purely to plant stress, rather than insufficient nitrogen in the root zone, should start to disappear. Keep an eye on the corn, and be prepared to use the University of Minnesota Supplemental Nitrogen worksheet or other tools to make your decisions about the need for supplemental nitrogen in a couple weeks.

Support for this project was provided in part by the Agricultural Fertilizer Research & Education Council (AFREC).

PrevPreviousDisease in small grains: When to spray, what to spray, when not to spray!
NextCrop Issues in Northwest MinnesotaNext