With temperatures struggling to rise even close to freezing this week, the lack of snow in states like Oklahoma, Kansas, and eastern Colorado will have winter wheat crops once again susceptible to winterkill. (USDA NRCS, Public Domain)

WASHINGTON — As of the morning of Jan. 18, 53.7 percent of the U.S. was covered with snow. While the highest snow depths can be found out West in the Rocky Mountains, a large majority of the Eastern half of the U.S. currently has snow on the ground. Even states as far south as eastern Texas, Louisiana, Alabama, Mississippi, Georgia and a small portion of the Florida panhandle woke up to white. Following a brief warm-up last week in both the Central and Eastern U.S., cold air made its way back into the U.S., beginning in the Plains mid to late week and eventually spreading to the East Coast over the weekend. These below normal temperatures have persisted this week, which helped allow it to snow down in the Deep South. But while is snowed in the Southeast, some states in the Plains remained snow-free during this cold plunge.

With temperatures struggling to rise even close to freezing this week, the lack of snow in states like Oklahoma, Kansas and eastern Colorado will have winter wheat crops once again susceptible to winterkill. This year’s winter wheat crop is already the smallest planted in the U.S. in over 100 years, with only an estimated 32.6 million acres planted. While significant losses to this year’s crop are being speculated out of states like Kansas, the full extent of the damage will not be able to be assessed and quantified until the spring when the crop emerges from dormancy. At that time, farmers will need to decide if they will continue with the crop or cut their losses and possibly plant a row crop such as corn. 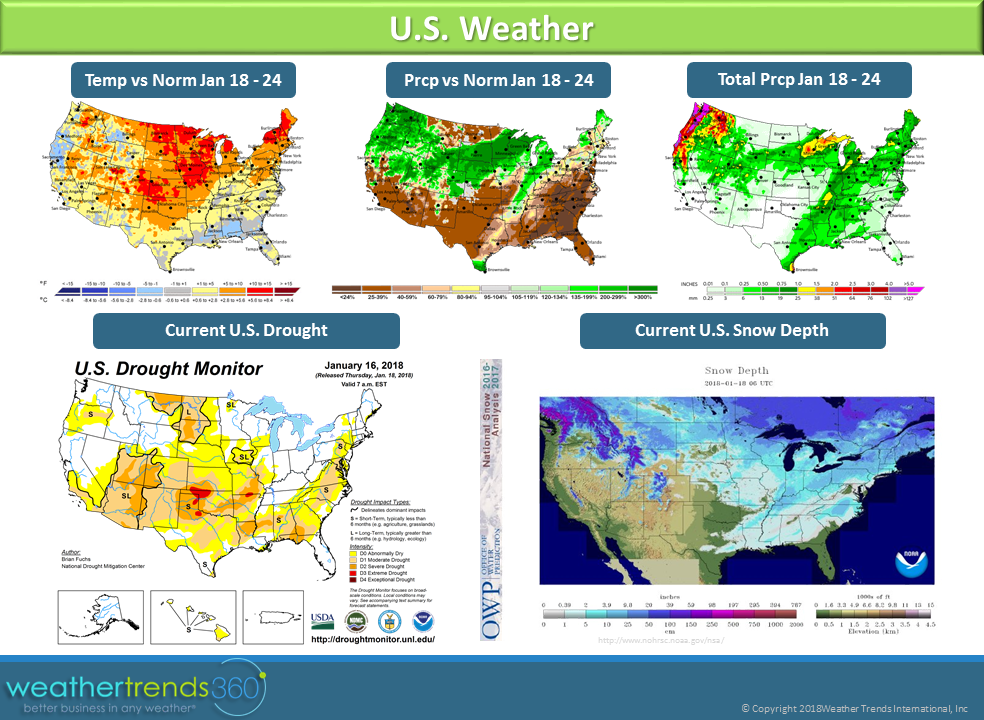 While conditions may remain dry for many in the south over the next seven days, a warm-up is on the way. Below normal temperatures will hang around the rest of the week in the Southeast, but temperatures 10-15F above normal have already begun to spread in to the Northern Plains. By the weekend, these warmer trends are expected to spread eastward, providing a significant swing in highs compared to earlier in the week. While a day or two may trend slightly cooler than normal, this overall warmer trend is forecast to persist through the end of the month. By this weekend, large portions of the Central U.S. could see temperatures more than 15F above normal with highs nearing the low to mid-60s as far north as Missouri.