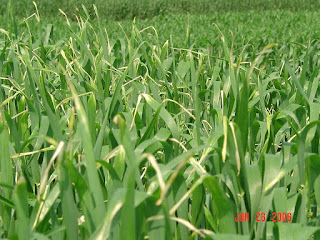 Photo 1. Effect of hot, dry, and windy weather on young and tender flag leaves on the variety ‘Glenn’.

Short small grains?The recent heat wave has some concerned about the fate of the small grain crop. While there are many reports of a “short” crop in southern Minnesota, the timing of the warm (>90F) weather this year has likely not significantly reduced yield potential. Although few of us enjoyed the hot and windy conditions last week, the last several days have brought us ideal small grains weather, which looks to extend for at least the remainder of this week.

There have been many reports of short small grains in southern Minnesota. Both heat stress and drought stress will speed up plant development, meaning either of these stressors will affect the crop. The heat wave that came through southern Minnesota the first week of June is largely responsible for the shorter crop, which coincided with stem elongation. Hot weather during stem elongation tends to shorten the crop compared to normal.

A short crop doesn’t necessarily mean reduced yield, however, which was the case in 2017. We had an abnormally short crop in 2017, but the short crop still broke the state record for spring wheat yield (67 bu/ac). (See Short(er) spring wheat crop = lower grain yield?) Small grains in northern Minnesota that were jointing last week during the heat wave may turn out to be shorter than normal as well, similar to the story in southern Minnesota.

Any fields that were in the vegetative stages last week likely had some yield components affected. Tillering can be reduced if there is heat during tillering, which reduces the total number of tillers and thus the total number of spikes. The number of spikelets per spike is determined during the 4-5 leaf stage. During this stage, for every 5F increase in temperature above 65F, wheat will produce 1 less spikelet per spike. Although heat during these phases will affect yield components, final yield is a complex trait that is dependent on a number of other factors.

If you are concerned about your wheat having a “disease” that causes the leaf to dye back from the leaf tip, don’t be alarmed. Hot, dry, and windy weather can cause a physiological response called leaf tip necrosis, which is NOT caused by disease. This response is largely cosmetic, and shouldn’t have any impact on grain yield. For more information, visit: Help, my flag leaf is burning! Hot weather and leaf tip necrosis in wheat.

Heat during heading and pollination

Much of the spring wheat in southern Minnesota was flowering last week. Heat during pollination can affect fertilization and kernel abortion, and reduce the number of seeds per spike. The most severe pollination issues occur when hot conditions occur the 5-7 days preceding flowering, which is when pollen is developing within the flower. If canopy temperatures are above 86F during this time, pollen viability was likely reduced. Temperatures above 93F have severe impacts on pollen viability.

The good news is that air temperature does not equate to canopy temperature. When soil moisture is adequate, evaporative cooling will keep the crop canopy 2-3F cooler than the air temperature. As a result, canopy temperatures likely didn’t exceed 93F last week unless moisture stress was also present. Since last week, the wheat fields I’ve looked at seem to have pollinated successfully, including the fields that flowered later in the week. If fields did have pollination issues, be on the lookout for ergot at harvest, as poor pollination will increase the prevalence of ergot.

How to check for successful pollination

If you are concerned if your small grains pollinated successfully, look for developing grain. Within 3-4 days after pollination, successfully pollinated flowers will begin to take the shape of a developing wheat kernel.

To check for successful pollination, dissect the flower and look at the ovary. If it was successfully pollinated, the ovary will take the obvious shape of a wheat kernel (Figures 1 and 2).

If fertilization was unsuccessful, the florets will open up (Figure 2), to allow for cross-pollination. Since pollination of tillers is staggered out over several days, it is possible for unfertilized ovaries to be cross-pollinated once they open up. However, there is likely only a 30% chance of this occurring under typical weather conditions in Minnesota. Even under “perfect” conditions, success rates of cross pollination are only around 60%.

Heat stress is never a good thing for small grain yield. Small grains are cool-season crops which thrive in 60-70F temperatures. Of the small grain crops, wheat is the most heat tolerant, with oats and barley being more sensitive to warm temperatures. Although yield components (tillering, # spikes, # spikelets per spike, successful pollination) were likely affected by the hot weather so far this year, small grains have an incredible ability to compensate among yield components.

Cool weather (especially nighttime temperatures) during the grain fill period will increase grain yield. Cool temperatures extend the duration of grain fill, increase kernel weight, and can increase the number of kernels that develop per spikelet from 2-3 (typical), to 3-4. Added together, these yield components can make large contributions to final yield.

The hot weather has affected the small grain crop in Minnesota this year, but altogether it has likely not impacted yield significantly. Given the cool, dry weather forecast for at least the rest of this week, we are hopeful that the crop will have cool conditions during grain fill, and still be a productive crop this year.

Source: U of MN Extension